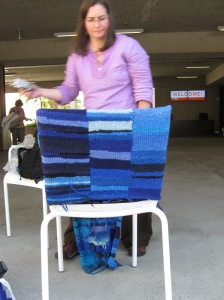 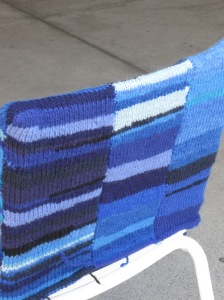 ” Yarnbombing ! Yarnbombing ! ” someone was yelling on the street I didn’t pay to much attention to this because someone in my head is always yelling YARNBOMBING!

We were installing our yarnbombing in the Jensen Installation at the Oakland Museum. The Jensen Installation is an array of brilliant white metal chairs and tables that can be arranged into groups or hung up on a huge floor to ceiling black board by the people who come through the Oakland Museum . You can write on the black board too , so the whole thing is fun to play with and interact with and I wanted to interact with it by yarnbombing it. We had laboriously knit 2 slipcovers for 2 chairs , a red one and a blue one . The blue one was knit in 3 strips by three knitters. I had like the idea of the knitting being in primary colors since the chairs were icy white.

Slipcovers are a ton of knitting > I had always wanted to make knitted slip covers but was too much knitting to get through . But I was able to do it because I had promised I would and made it a deadline . { This is my secret to producing extreme knitting }

So there we were sewing these big slip covers on at last And this yarnbombing shouting started up. 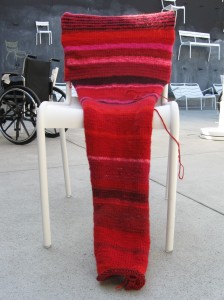 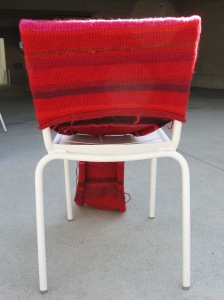 In walks a tall handsome man with his slightly shorter handsome young son. He had several strings of shell around his neck. This was Monte – a Miwak activist Native American who works for the city in the Public Works Department removing graffiti . And he knew every yarnbomb that I had up in the city of Oakland and it’s exact location and condition.

” Oh yes ! ” he said . ” We’ve had a lot of conversations about wether we should leave that yarnbombingup or not. But we’re lazy guys so if no one complains we just leave it up ! ”

I was amazed . Some how I had thought that the police were in charge of yarnbombing violations  –  but no  – it is the public works department . And I was really seen as a graffiti artist by the people in charge of graffiti . I had always sort of felt like I was pretending to be a graffiti artist but apparently I had been one all along  . This was exciting news .

I am happy to have those on power on my side. 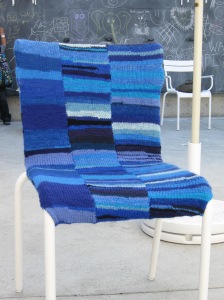 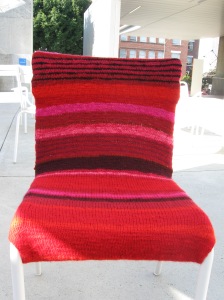 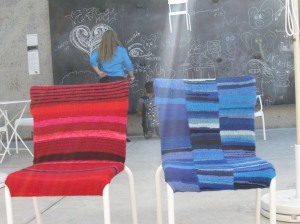 a link from another blog about these chairs here

Like Loading...
November 27, 2011 by streetcolor Categories: UncategorizedTags: how to be a graffiti artist, knitting really big projects, who removes yarnbombing, yarnbombing chairs, yarnbombing in Oakland, yarnbombing is graffiti 3 Comments